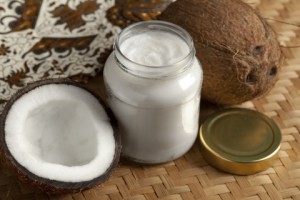 There is a lot of buzz about coconut oil these days. You see it everywhere from your beauty supply store to the cooking oil aisle at the supermarket. I recently heard a certified nutrition specialist on NBC say that coconut oil is bad for you because it’s solid, so I just want to set the record straight about coconut oil.

Cooking
Coconut oil is an excellent oil to use for cooking. You may have heard that it has a high saturated fat content and that saturated fat is not good for your heart. That is true. However, research has found that the saturated fat from plants like the coconut is actually beneficial for your heart as compared to saturated fat from animal protein. Coconut oil has special fats called medium chain triglycerides (MCTs). It has been shown that breaking down these types of healthy fats in the liver leads to the efficient burning of energy (and who doesn’t want that?). In addition, lauric acid, a type of MCT found in coconut oil has been shown to increase the good (HDL) cholesterol in the blood which helps to improve cholesterol ratio levels.

Coconut oil comes from the nuts of mature coconut plants. In its unrefined state, the nuts are crushed and the oil is released. You may have heard the term “cold pressed” oil. This means that the oil is bottled immediately after the crushing process. Unrefined oils have natural flavors, but have a lower smoke point and tend to go rancid much more quickly. The smoke point of an oil is the temperature at which the oil starts decomposing and toxic chemicals are released. If you have used coconut oil before, you’ve probably noticed that it smells and tastes like coconuts. This is probably because it’s unrefined and cold-pressed. The smoke point of unrefined coconut oil is about 350 degrees Fahrenheit. Therefore, I only recommend using coconut oil if you’re doing low temperature cooking like baking or sautéing on low heat.

You don’t have to restrict your use of coconut oil to low temperature cooking. The MCTs in coconut oil are also great brain food and I often put a spoon of coconut oil in my smoothies to get some of those good fats. It is also a great dairy free replacement in baking. I’ve even used it as a substitute for butter in cookie recipes. Wake up your taste buds by using coconut as a “creamer” in coffee. It gives your cup of joe a smooth, buttery and sweet taste!

As I mentioned in my intro, coconut oil is solid at room temperature, but melts at 76 degrees Fahrenheit. Last year I gave a jar of my coconut oil peppermint body scrub (more about that below) to a friend in Liberia and when she opened it, it was completely liquefied. Coconut oil is liquid in tropical climates and its nutritional value is in no way affected by whether you’re using it in colder or warmer climates.

Body and Beauty
Coconut oil has just as many uses in your bathroom as it does in your kitchen. I use it to moisturize my skin and hair and even to remove my makeup (especially eye makeup). Coconut oil is also a great base to make home-made body products. When my skin is extra dry, I mix it with shea butter and olive oil to make an extra thick moisturizer. It can also be used as a diaper cream and as a natural effective nipple cream. Moisturize your lips with coconut oil (although I prefer shea butter for this), use it to minimize stretch marks and you can also use it as a natural low SPF sun screen.

If you haven’t tried my coconut peppermint salt body scrub yet and you have dry feet or skin, click here to buy it now. The salt in that scrub exfoliates your skin and the organic coconut oil leaves it feeling soft, moisturized and heavenly.

Buy Coconut Oil in Glass Containers
When you’re shopping for coconut oil, I recommend buying it in glass containers. If you’ve been reading my blog for a while or following me on social media, you know that I’m a big proponent of glass and I avoid it like the plague. Plastics contain toxic chemicals, including one that you have probably heard of called bisphenol-A or BPA. BPA is a hormone disruptor which has been linked to hormonal cancers like breast and prostate cancer. It’s also been linked to other reproductive disorders such as genital birth defects and infertility. Oil is one of the substances which increases the rate at which BPA permeates food. This means that if your oil is in a plastic container, it’s most likely full of BPA. Don’t be fooled by “BPA-Free” containers either, as most BPA Free containers contain BPF or BPS, other endocrine disrupting bisphenol chemicals. I strongly advise buying your coconut oil and any other oils in glass containers.

As you can see there are multiple uses for coconut oil around the house. It’s great for your heart and brain, it’s a good dairy alternative and it’s great for your skin and hair too. If you don’t already have coconut oil at home, it’s time to run out and buy some in a glass container and don’t forget to get one of my coconut peppermint salt scrubs, which, as you might expect, are in glass containers :-).

Now it’s your turn. I know that many of you may have even more innovative uses for coconut oil than those I’ve mentioned in this article. So, what do you use it for? What will you use it for in the future? Let me know in the comments below.