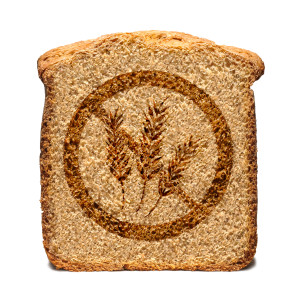 If you’ve been watching the trends at supermarkets, you’ll notice that most of the packaging in the 80s had a fat free label. Around the mid-late 90s, the craze was sugar-free and the labels reflected that. Nowadays you’ve probably noticed a lot of gluten-free labels. Is this just another trend? I beg to differ. Gluten has been linked to autoimmunity and is causing and aggravating many other digestive disorders.

What is gluten?
Gluten is a protein found in wheat, barley and rye. It helps dough to rise and gives the finished product a chewy texture.

Of course it’s in baked goods and breads because most flour is made from wheat, including all-purpose, cake, bread and self-rising flour (can you tell that I used to be a serious baker?). However, almost every single processed food contains some derivative of wheat. I’m not just talking about crackers. Even condiments like ketchup, mustard and BBQ sauces have gluten in them.

What’s the big deal about gluten?
Celiac disease is an autoimmune disease that damages the villi of the small intestine and interferes with the absorption of nutrients from food. Gluten triggers this process, so whenever someone with celiac disease consumes gluten, their body attacks itself.

Gluten also plays a big role in other autoimmune diseases. A recent study found that patients with other autoimmune diseases (other than celiac) had gluten intolerance. In many people, gluten irritates the small intestinal tract and causes micro tears. If you’re gluten sensitive and you constantly continue to eat it, the micro tears eventually won’t heal, will create holes in the lining of the small intestine and other proteins which aren’t supposed to be in the bloodstream get in. The body doesn’t recognize those proteins and begins to attack them. This is one way that gluten can trigger allergies and autoimmunity.

Gluten can even cause problems for people without autoimmune diseases. Many people have found that they have digestive issues such as bloating and gas when they eat gluten.

If you suspect that gluten might be the source of your issues, I suggest that you go on a strict gluten-free diet for a couple of weeks to see whether it makes a difference in how you feel. If you have an autoimmune disease, in addition to trying a gluten-free diet, I suggest getting tested for gluten sensitivity. It’s a simple blood test, but you have to ask for it as most conventional doctors don’t normally test for gluten sensitivity.

Here are a few tips for going gluten free:

Limit Eating Out. I’m sorry to say this, but depending on where you live, it may be difficult to find a plethora of gluten-free options. Some places are realizing that gluten can cause major health problems for people and have included a few options on their menu, but not everyone has caught on yet.

Try other grains, nuts and seeds. There are many other grains that you might want to try when you’re on a gluten-free diet, such as quinoa, brown rice and millet. There are also flours and pastas made from nuts, seeds and grains so you won’t miss your gluten at all. Gluten-free breads and wraps are also available in natural foods stores and restaurants. Although I’m suggesting that you try other grains right now, there is an argument that grains in general may aggravate autoimmunity, but I’ll get to that in a later post. For now, I suggest that you start by avoiding gluten.

Read the Labels. This goes without saying, but you really have to read the labels carefully if you’re gluten-free. Don’t assume that an item doesn’t contain gluten. If it doesn’t say “gluten-free” don’t buy it. Also if an item says “made at a facility that processes wheat,” then you know that it probably contains some trace of gluten. There are many items which inherently don’t contain gluten, but have been cross contaminated by gluten. A great example of this is oatmeal. Oatmeal inherently is a gluten-free grain, however, it’s often processed with wheat, so you’ll want to avoid oatmeal unless it is specifically labeled “gluten-free.”

I’ve actually been on a gluten-free diet for the past few months and I have to admit that, it’s much more difficult eating out on a gluten-free diet than on any other diet that I’ve tried, but it can be done. The good news is that more and more restaurants have gluten-free options on their menus these days, but when in doubt cook at home!

Now it’s your turn, have you tried a gluten-free diet? If so, what changes did you notice? Do you have any favorite gluten-free recipes? Let me know in the comments below.

Leave a CommentLeave a Reply to Dorraine